PROJECT KALKI, In its continuing documentations called 'Transwomen on Love' bring to you the experiences, thoughts and opinion sharing of transwomen. In this video (in Telugu) transwomen Laila and Panna, both originating from Andhra Pradesh, talk about love relationships.

Posted by Kalki Subramaniam at 8:25 PM No comments:

Documenting Prema - An interview with the multilingual, multi-talented transwoman Prema.

Here is another documentation from our Project Kalki Films about Prema, a transgender woman. Prema, a native of Coimbatore city, is a caterer, a multi-talented personality who can speak in five languages. In this interview to Kalki Subramaniam, Prema opens her hearts and shares her life memories, aspirations, disappointments, pain and the good times.

In this interivew, she purposely speaks in Malayalam with the reason to break transphobia and make Kerala understand transgender people and their lives. The interview is in Malayalam.

Posted by Kalki Subramaniam at 11:42 AM No comments:

Featured videos of the Transwomen Trainees

One of our trainees,  transwoman Kanchana filmed this interesting video. Will Chennai people accept a transgender person as an M.L.A?

Posted by Kalki Subramaniam at 2:32 PM No comments:

Bold and the Beautiful - at Spaces, Chennai

We held another show of the documentaries of our girls at SPACES in Besant Nagar, Chennai on 12th June 2011 celebrating the pride month. Our dress code for the occasion was Black and White. We were sizzling :). The event was a success. Many students interacted with the group and there were healthy discussions after the film. Selvi's film and Roja's film were screened first time. Welcome girls!

Posted by Kalki Subramaniam at 8:22 PM No comments:

Advocacy and Empowerment through Online Radio

Here is my first podcast on Project Kalki podcasting initiative. Please listen to it.
Posted by Kalki Subramaniam at 7:36 PM No comments:

The first screening of our short documentaries made by 7 transgender women including my film 'Smile' was a huge success. My trainees were so happy to see their creations on big screen. Think about the confidence they will get after the screening. Not only were they inspired to make more such documentaries, but also some of the transwomen who were in the audience also were inspired to learn multimedia and film making. That was the second success on the same day because, the ultimate aim is to inspire more under privileged transgender people, transform, empower and provide them opportunities for a dignified life.

The evening after screening, we celebrated at my home.

What the media says about the screening? 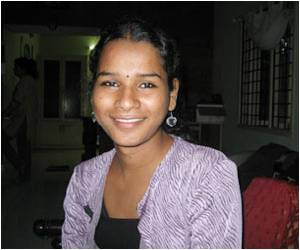 Teenage Transgender Documentary on ‘Hope’
Posted by Kalki Subramaniam at 9:27 AM No comments:

Documenting the courageous stories of People living with HIV

I will be editing these films and have planned to screen it on 10th of December, World Human Rights day. Our work continues with new assignments and 'PROJECT KALKI' is really taking of well. We need so much support from people. I hope in 2011, some of my team girls who are still begging and doing sex work will be able to emerge and lead a dignified life.
Posted by Kalki Subramaniam at 10:17 AM No comments:

PROJECT KALKI will reach out to more under privileged transgender people. After our screening in event in Chennai and Coimbatore, we will be making more films in the coming months. From September 2011, we have plans to screen our documentary films in several venues across India. The films made by our girls will participate in many films festivals too.

. In the coming months, many more transgender girls will be trained to make their own short documentary films. By October, many of them will have made documentaries.In October 2010, we will conduct a special film festival to specially screen all the films made by the girls
.
I have plans to teach them complete multimedia skills including photography, videography, film editing, audio and sound, and the spectacular world of internet and the web media  technologies. In 2011, I want setup a big multimedia center which will be a training and production house for visual media and communication, a education project for transgender women. Through this center, not only the poor transgender women will benefit but also any under-privileged student from any community can learn and empower themselves. 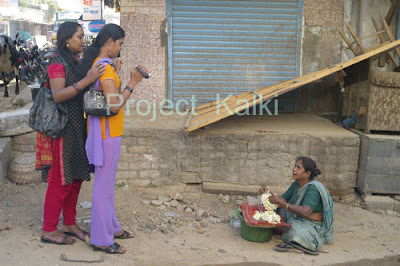 Sandhiya is being trained by Kalki. Sandhiya is making a documentary about abandoned old people.
These women are making their own documentaries now. After the completion of their films followed by the immediate screening, we will invite more transgender women to participate in this project.
Posted by Kalki Subramaniam at 12:17 AM 1 comment:

A Group Of People Of The Third Gender Wield Handycams To Portray Lives Of The Lesser Privileged
Priya M Menon | TNN
A group of people huddle around a laptop in a small room. As the rain drums steadily onto the asbestos roof, transgender (TG) rights activist Kalki Subramaniam takes them through the various stages involved in making a short film. Read more.. 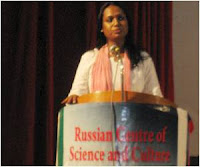 Transgender persons in India and other Asian countries are gradually surfacing from the social stigma. Read more.. by Nancy Needhima on  November 18, 2010 at 6:21 PM
Transgender Kanchana’s life is very similar to the stuff nightmares are made of. Read more..

A transgender activist, Kalki Subramaniam, trains her community members in documentary film-making in Chennai.
Subramaniam said on Friday the Information Technology could play a tremendous role in the empowerment of marginalised, stigmatised transgender community. Read more..

Women's Feature Service
The Celluloid Dreams of Transgenders
by Hema Vijay, December 6, 2010
Chennai (Women's Feature Service) - They are seen as people who harass pedestrians on the streets, collect money by threatening people, kidnap kids, engage in sex work, and so on. But these stereotypes do little justice to transgenders. Like everybody else, they can be dynamic litterateurs, creative artists and, above all, socially committed individuals. Read more..

The correct picture
Akila Kannadasan
Tamil cinema has long degraded transgenders, often depicting them as prostitutes and hecklers. “This should change. Such movies give the audience a wrong notion about us,” says Kalki Subramanian, a transgender rights activist. Read more...

By Paromita Pain
WeNews correspondent
Kalki Subramaniam's video project for transgender women in India began with her own scholarship in video making. Now she's assisting other transgender women to shoot their own video as a way of breaking out of poverty and abuse..... Read more..

Posted by Kalki Subramaniam at 11:40 PM No comments:

The documentary films of the first seven girls were screened at Kovai Rainbow Festival celebrations on 26th June 2010 at :

Posted by Kalki Subramaniam at 11:38 PM No comments:

My name is Kalki Subramaniam. I am the founder of ‘Sahodari Foundation’ an organization working for the social and economic empowerment of transgender persons.I am transgender rights activist, and a transsexual woman myself. I hold two Master’s degrees - first one in Journalism and Mass Communication and the second in International Relations.

In December 2010, I won a scholarship from a Goa based organisation called 'Women Aloud'. I attended a two weeks program called WAVE (Women Empowerment Through Video Blogging). After the completion of my training, I was provided with a camera to make documentary film every month on community issues. Since then I have been working on that and have produced 5 small documentary films.  The camera, which is a Canon Legria FS 200, a small handycam, has been a great tool for my advocacy work.

In April 2010, I had the idea to use the camera to its full potential and beyond and went a a step ahead. I wanted to share my knowledge with my transgender community. This was exciting to me and 'Project Kalki' was born. I named the project as 'Project Kalki' because it a dream project for me.

This project will transform them as documentary film makers. It is a great achievement for each one of them. All the interested and talented girls will be further trained in multimedia and will be placed in jobs when they can use their creative potential to the maximum. The idea is to provide them livelihood through training in multimedia skills.

Many of them never imagined they can make their own documentary films.I am extremely happy that I am providing this opportunity to my friends. It gives me bliss to see their happiness when they work on their films. with extreme dedication.

Seven under privileged transgender girls are continuously being trained in documentary film script writing, story board, video film shooting, technics such as different camera angles and shots, camera handling and safety. These women are given first hand training by Kalki. 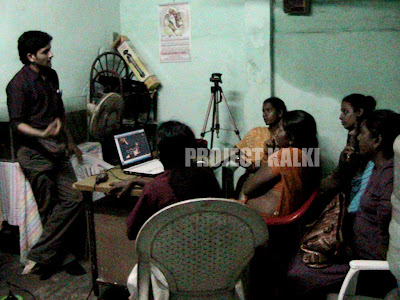 We will be taking in more interested girls in the future and offer them the opportunity to learn and be documentary film makers. If you are interested to be a part of this project in anyway, please write to Kalki. Her email address is: aurokalki@gmail.com
Posted by Kalki Subramaniam at 11:08 PM No comments:

Promote Your Page Too